The two residential towers are rising near the new emerging business and entertainment district of the Bay Area in Pasay City. Roxas Blvd. is the link to EDSA to the south and is just 500 meters away from the Patio, which is the entryway to the three major cities of Metro Manila: Makati (to the east), Manila (to the north), and Parañaque (to the south).

You can access the residential project quickly through Macapagal Blvd., EDSA, NAIA Expressway, and the nearby MRT and LRT Stations. The resort-inspired development provides a well-secured haven for all those looking for a tranquil environment amid a bustling and fast-paced city. Imagine you and your family will have unlimited access to the lifestyle-changing amenities at the Patio while you have easy access to all of the city’s key destinations!

The site is just a few minutes away from the prime entertainment and shopping centers in the city like the Solaire Resort & Casino, Bayshore City Manila, Aseana City, PAGCOR Entertainment City, Okada Manila, City of Dreams Manila, and Resorts World Manila. Aside from the Japanese Embassy, the other embassy near the Patio is the US Embassy (across Roxas Blvd.). Patio Madrigal is also surrounded by corporate and government offices such as the GSIS Headquarters, PNB Financial Center, Manila Film Center, World Trade Center Manila, DFA, NBI, Pasay City Hall, Toyota Manila Bay, Philippine Airlines Head Office, and the Philippine Trade & Training Center, among others. But one of the most distinguishing features of Patio Madrigal is its proximity to Manila’s University Belt, which is favorable for your kids. You need not commute too far every day to go to school. Even during a pandemic, when face-to-face schooling is allowed. Your children will not endure the harsh everyday travel to and from home. 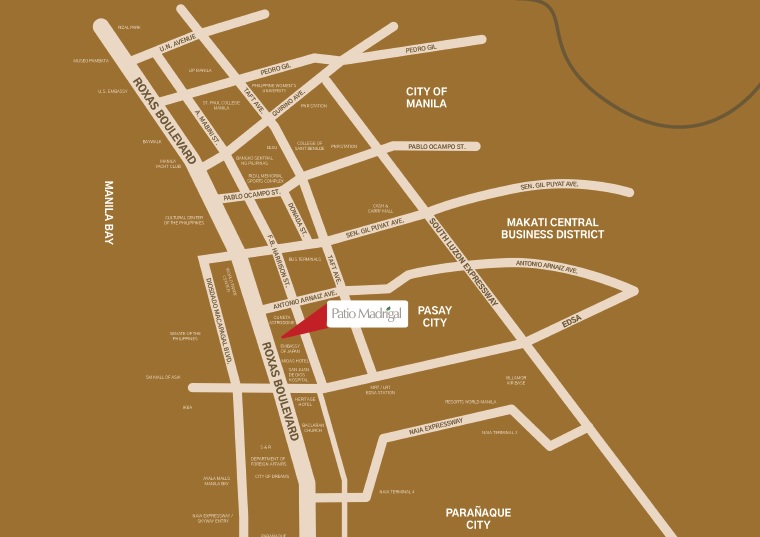